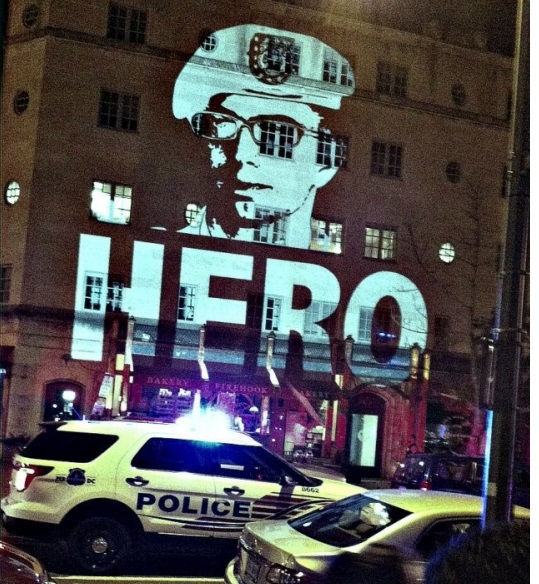 http://www.privatemanning.org/featured/5ways
The outcome of PVT Chelsea (formerly Bradley) Manning’s trial on August 21st, while better than the 60+ years the government’s prosecutors were calling for, is an outrage to the idea of American justice, and should deeply concern democracy advocates everywhere. PVT Manning’s 35-year sentence was condemned by public figures as wide ranging as Cornel West, Ron Paul, and the American Civil Liberties Union’s Speech, Privacy, and Technology Project Director Ben Wizner, who stated,

[A] legal system that doesn’t distinguish between leaks to the press in the public interest and treason against the nation will not only produce unjust results, but will deprive the public of critical information that is necessary for democratic accountability.

The truth is that the fight for PVT Manning’s freedom is far from over. In fact, there are multiple avenues for relief that could result in PVT Manning serving fewer than 10 years behind bars. Strong showings of support by the public will significantly improve the chances for each of these avenues to succeed. It won’t happen overnight, but with our nation’s democracy on the line, and a major precedent being set for the rights of whistleblowers everywhere, we think that continuing to organize in support of PVT Manning is the least we can do.

With that in mind, here are 5 of the most important ways you can continue to support PVT Manning right now:

President Obama has already granted pardons to 39 other prisoners, and a White House spokesperson said he would give consideration to PVT Manning’s request. Showing public support for PVT Manning’s application is the best way to give her a real chance of being released in 3 years, or even sooner.  Sign our petition on Whitehouse.gov, and then submit your photo with a personal message at http://pardon.bradleymanning.org

Maj. Gen. Buchanan has the power to reduce PVT Manning’s sentence for the first 6 months after the trial. Convening Authorities reduce soldiers’ sentences when they believe the court martial failed to deliver justice. We think PVT Manning deserves clemency more than anyone, and we know it’s important to show it!

3) Write and call the White House

While our current focus is on the White House petition, that is only the beginning of our effort to demonstrate our support for military whistleblowing to the Commander in Chief. You can write to and call the White House in order to express your views in a more personal manner. You can also help by organizing a letter-writing drive with others in your community!

4) Donate to the appeals process

The legal appeals process is the most important avenue to hold the U.S. military to account for the many ways in which PVT Manning’s due process rights were violated throughout her trial, from the months of unjust and abusive solitary confinement to the utter failure to provide a speedy trial. PVT Manning’s legal defense will target appeals at all of the ways in which PVT Manning’s trial violated her rights under the U.S. Constitution and the UCMJ. Your donation can help support this crucial process.

By contributing, you’ll also be helping to uphold Americans’ right to a speedy trial, to be treated as innocent until proven guilty, and to be made fully aware of the nature of the charges against them without fear those charges may change midway through the trial.

5) Write to tell PVT Manning of your support!

Near the end of her trial, PVT Manning expressed gratitude to the countless numbers of supporters who’ve written her letters in prison. Now that the trial is over, she is looking forward to having the ability to write people back.

You can write to PVT Manning at the address below. While the outside of the envelope must be marked “Bradley Manning,” PVT Manning will be happy to accept letters that refer to her with her chosen name Chelsea on the inside.