Fellow Veterans and Friends of Veterans,
Attached is an article that appeared in the Los Angeles Daily
News more than seven years ago.

It covered our first Sunday Rally on March 9, 2008 and the emphasis was about Veterans Park Conservancy and their 16-acre public park agreement.

It was also about our hanging the American Flag above the “padlocked wrought-iron fence.”

Moreover, it exposed the truth about our overall cause and that is Veterans living in campers along San Vicente “outside” the wrought-iron fence while “others sleep in grungy, urine-smelling blankets on the sidewalk” instead of being housed and cared for
on the “inside” of their rightful Home.

One thing has changed:  Veterans Park Conservancy’s illegal “sharing agreement” has been canceled, their bogus / illegal Hollywood amphitheater has been blocked by a Federal Court Order, and VA officials have removed or covered the signage / plaques that made any false reference of this  being a “national park.”

We are extremely grateful for this change. See attached “Before and After” photos of the public park propaganda.

However, some things have not changed. Homeless Veterans
still live in campers “while others continue to sleep in grungy urine-smelling  blankets on the sidewalk“ and Veterans are prohibited from entering their own “Home” because of the “padlocked wrought-iron fence” at front entry gates. 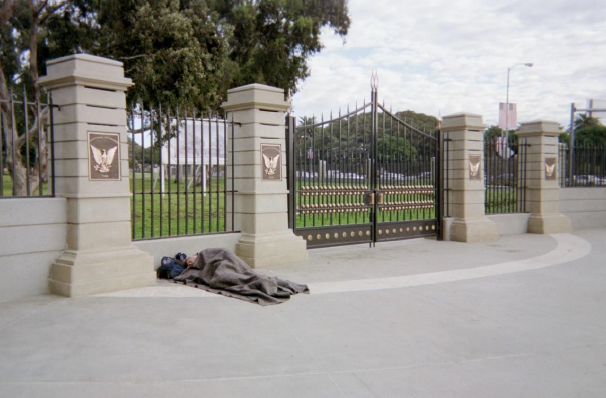 We cannot declare success on behalf of our war-injured and
homeless Veterans until the front gate is unlocked and directly behind it on the Veterans Grand Lawn, an emergency
“Humanitarian Crisis Housing”  facility is established so that we can
immediately begin to “Bring Our Homeless Veterans HOME.”

Let there be no misunderstanding:
Veteran homelessness must end “Now,” not the end of the year.

Dr. King declared: “We are now faced with the fact that tomorrow is
today. We are confronted with the fierce urgency of now. In this unfolding conundrum of life and history, there “is” such a
thing as being too late. This is no time for apathy or complacency. This is a time for vigorous and positive action.”

And so it is with the Veterans Revolution — Tomorrow is Today
— and today begins the final countdown to “Bring Our Homeless Veterans HOME.”

For seven years we’ve protested the misuse of our land and the abuse of our disabled and homeless Veterans … and we will not quit until our Mission is completed — “Save Our Veterans Land” and “Bring Our Homeless Veterans HOME.”

Today is important!  Join us for our 365th consecutive Sunday
Rally as the voice of our voiceless war-injured and homeless Veterans.