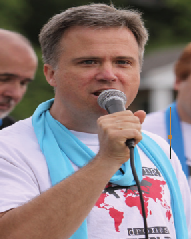 David Swanson To Speak on Ending All War May 10.

His books include: War No More: The Case for Abolition, War Is A Lie, When the World Outlawed War, and The Military Industrial Complex at 50.

He is the host of Talk Nation Radio. He helped plan the nonviolent occupation of Freedom Plaza in Washington DC in 2011. He has worked as a newspaper reporter, as press secretary for Dennis Kucinich’s 2004 presidential campaign, and communications coordinator for ACORN. He blogs at DavidSwanson.org and WarIsaCrime.org and works for RootsAction.org Swanson is Secretary of Peace in the Green Shadow Cabinet.

Free Admission, Open to All.

Parking in the UUC lot and Lot M. Access to UUC parking is through Gate 5, McClintock/Jefferson entrance to USC. Get a parking permit at Gate 5 kiosk. Tell them you are going to the church. Turn left onto 34th Street and then next left onto Watt Way. Turn right into Lot M and go through Lot M to UUC Lot.