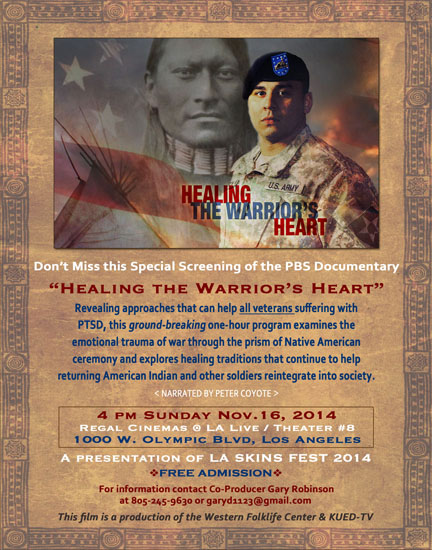 FROM YOUTUBE CHANNEL: The Western Folklife Center’s Media Producer Taki Telonidis recently returned from a two-week shoot on the Blackfeet reservation in northern Montana for the documentary, Healing the Warrior’s Heart. This public television special presents a Native American perspective on military service, and sheds new light on PTSD by examining the emotional trauma of war through the prism of Native American tradition and ceremony. Tribal cultures have long understood that helping warriors heal emotionally is key to maintaining a healthy community, and for centuries they have used healing songs and ceremonies to cleanse them of war.

FROM FILM FESTIVAL SITE:
Today it’s known as PTSD, but warriors and soldiers of every era have suffered from the trauma of battle. At one point in the past ten years, suicide rates among American soldiers serving in Iraq and Afghanistan exceeded the numbers killed in battle. What can be done to heal these wounds and end this tragedy? This films seeks answers among the first warriors of our Nation. Examining traditional Native American warrior cultures and healing methods, we discover what these ancient peoples have known and practiced for centuries when it comes to preparing a person for battle and bringing them back to the community afterwards.