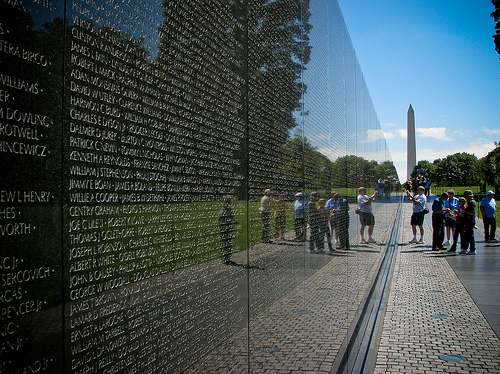 Members of the VFP Direct Action Team are organizing a gathering at the Vietnam Veterans Memorial Plaza in New York City Oct. 7 at 6 pm. Our intention is twofold:

1. Nonviolent direct action to challenge and address the illegitimacy and weaken one of the prime pillars of the oppressive state–New York Mayor Michael Bloomberg’s “private army,” the heavily militarized NYPD. This is based on their many abuses of power but in this case, specifically the decision enforced on May 1 to deny veterans and others the right to peacefully assemble after 10 p.m. at the Vietnam Veterans Memorial. And directly related to that:

2. As Vietnam veteran Paul Appell eloquently said, “War veterans, loved ones of the fallen, and certainly those living in war zones do not have the option of closing down their memories at 10 p.m. … Some of us are not going away at 10 p.m. or any other time. If they do not like it, maybe they should have thought of that before they sent us to war.”

On this day and at this place, our demands will be straightforward:

▪ Demand an end the the 11 year war in Afghanistan

▪ Demand an end to all U.S. wars of aggression

▪ Remember those who have fallen

▪ Stand up for our right, and duty, to assemble and organize

This is not intended as a mass public gathering, where we expect or want thousands and are articulating all the many ramifications of corporate militarization, nor is it a public education project. This gathering at the Viet Nam Veterans Memorial on Oct. 7 is intended as a very specific veteran-led direct action opposing war and the arbitrary use of force by the NYPD.

We are focusing on are the direct, long lasting-and immediate effects of war–where and to whom it happens–death, destruction, permanent injury and trauma to those in the war zone, and our inalienable right to assemble to address those very specific grievances.

Veterans, especially those who have been directly affected by war, affirm our peaceful purpose:  Remember the fallen, get out of Afghanistan, end all wars and don’t tell us where and when we are permitted to assemble and exercise our fundamental human rights.

October 7 at the Vietnam Veterans Memorial will be a time to remember soulfully and with dignity those who have fallen in every rotten war America’s manipulative leaders have involved us in since the beginning.