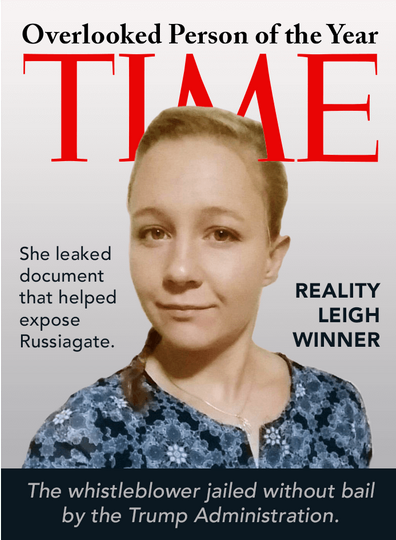 Reality Leigh Winner is a whistle blower who has been jailed without bail since June 3, 2017 for helping expose Russian hacking efforts leading up to the 2016 US election.

Charged under the Espionage Act for sending a classified document to the media, she faces 10 years in prison. She is the first victim of the Trump Administration’s “war on leakers.”
Her trial is expect to begin late 2018 or early 2019 in Augusta, Georgia. Please donate to her defense, write her a letter, and
sign the petition! http://standwithreality.org/sign-the-petition/

On June 3, 2017 my daughter Reality Leigh Winner was arrested and jailed and later charged under the Espionage Act for allegedly releasing a top-secret document to a media outlet, The Intercept.  The document analyzed information about Russian online intrusions prior to the 2016 presidential election. Reality had been employed by a contract agency and worked at the NSA in Augusta, Georgia following her honorable discharge from the U.S. Air Force in December of 2016.

Reality has pleaded not guilty to this one charge, and her defense team is working furiously to defend against the Espionage charge, but the Court in Georgia continues to rule against Reality at every turn.  Reality has been denied pretrial bail and awaits trial in a small county jail in Lincolnton, Georgia.

The impact this has had on Reality and our entire family is devastating. Because of her special diet, Reality’s nutritional and medical needs are not met in jail.  She has been spontaneously denied mail, books, and visits.  In order to assist in her defense, she must be transported to the Federal Courthouse in Augusta, Georgia and spends up to 12 hours in full shackles and is strip-searched multiple times during the day.

Reality is an extraordinary woman and she remains very strong, despite the situation she is in.  I remain forever grateful to all who have written her and continue to support her.  There are some very good people out there and this has been one of the blessings to come out of this struggle.  As the days pass, our hopes for a quick resolution have disappeared, and I am now realizing that we have a very long and hard battle ahead of us.

Reality needs support long term and I am hoping that she will have this.