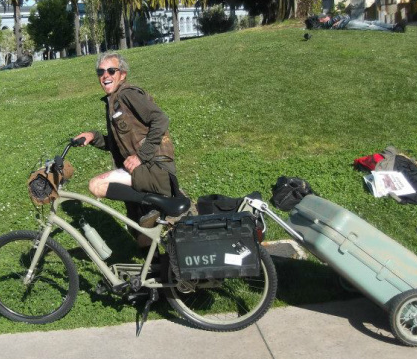 I wanted to give an update of my cross country journey to those of you who are interested and following me online.

I am currently in Biloxi Mississippi, after having sped through Louisiana in 5 days and crossing state line day before yesterday. In Baton Rouge, I met up with the inimitable Ward Reilly, and stayed with him and his charming wife Melissa at their lovely home in BR.

It was a great visit, I learned so much from Ward about the history of the GI Resistance movement, and was very impressed by his credentials as an activist and organizer.

On my last day in BR, we linked up with elements of the Green Army, Gen. Honores’ outfit for dinner, they were on a NO BOBO (No Bail Out for Big Oil) anti-fracking tour, and accepted my offer to join up with them on the run to Slidell.

As it turned out, we went to Abita for a town hall meeting, and I had the pleasure to meet the venerable General. Short on time, with a bus to return, we made or way to New Orleans, an unexpected surprise that saved me some serious ride time.

I spent the night in “NOLA” and conducted outreach in the French Quarter all day, during the course of which I met a Chinese Olympic Cyclist training in the US by riding his bike from LA to L.A. We rode to the edge of town and parted ways.

Most of the veterans I have been meeting since Ft.Hood have been in good shape, that is to say they are doing okay with the VA and their own struggles. They seem to be older men and women who are coping successfully with their personal struggles and taking care of themselves.

It is really quite nice to hear of so many communities embracing the “Housing First” model, and seeing so many of the “Nam comrades getting their due.

The younger vets I am trying to reach are still hiding somewhere in the woodworks (I am thinking this is a regional condition).

Many civilians I have spoken with along the way are only sympathetic to a point: after all, this is an all-volunteer service, so these vets “should have expected it”.

But that being said, they continue to thank vets for “their service”

(thanks for doing it so I dont have to is more like it) and that has led me to think about reviving the draft, or having compulsory National Service, but this interferes with my ideological stance regarding autonomy and self-determination.

Most of the Janes and Joes on the street remain ignorant of the bigger geo-political issues. They are all predictably on the side of FOX when it comes to the Ukraine situation, and are firmly convinced the RUSSIANS are trying to start WW3 with the United States, and that we MUST conduct these over seas adventures or Afghanistani terrorists would conduct massive beach head assaults and we would be overcome by the overwhelming might of Al-Queda.

(this too, may be a regional disorder)

As most of you are aware and the “public” continues to remain in the dark about is that our troops have killed more of themselves than “the terrorists”, and this is a most vexing situation for me.

I am still in need of enough donations to acquire my own laptop, so I can wean myself off of the spotty dependence I have on public computers at the few and far between libraries.

My bike is holding up great, and I am confident I can reach Scott’s in time, as well as make it to D.C. and the Nat-Con.

You can see pictures of the bike, and some new photos at my website http://occupyveteranssanfrancisco.weebly.com  and if you happen to have pictures to post, please send them to my personal email at occupirate@gmail.com and if you happen to be anywhere between Biloxi and Gainesville along the 90 East, and would mind me dropping by, please contact me.

Update from "Pirate" Michael Clift on the road.