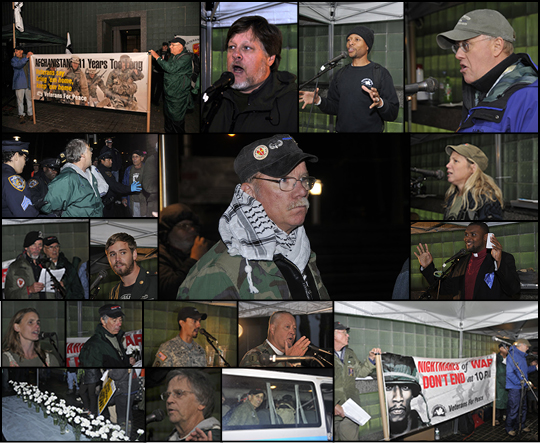 Twelve defendants, most of them veterans, just finished a 5-day court case on July 12 in which asserted our right to assemble peacefully at New York City’s Vietnam Veterans Memorial Plaza. We had been arrested last Oct. 7 because we stayed at the memorial, a city park, after the 10 pm closing time.
From the beginning Veterans For Peace organizers considered that we had structured essentially a win/win process that will continue regardless of the judge’s verdict, which was guilty on two counts.

The struggle to defend the right to assemble peacefully and address issues of dire importance, such as war, torture, environmental devastation, poverty, etc., will not be resolved by one court case or many. All human beings have an inalienable right to peacefully address issues in a public place and that right will never be secure under the current system. Our actions are part of a continual process to address the abusive (and murderous) inequities of this system and change it dramatically.
The right to assemble happens to be enshrined in the U.S. Constitution and international law, but we nonetheless find that right being increasingly limited, if not shut down completely. If we lose the right to assemble, as is clearly the intention of the State, and considering the capacity of the surveillance State, we will have very little chance to address grievances and so change the current violent and repressive state of affairs. The stand we will continue to take in NYC is critical to keeping that particular and highly
important door open.
Because it emphatically affirmed the right of assembly in a public place to address grievances, the Occupy movement was shut down by the U.S. government acting in coordination with local police departments. But when the NYPD shut down veterans at our own sacred place of memory they made a mistake. Many of the police and arresting officers made a point privately and some not so privately of telling us they supported us. Even the rightwing New York Post and the conservative Daily News wrote positive articles with pictures. The Daily Kos did a good piece and Chris Hedges, one of the great journalists of our time, attended the trial and is intending to write an article. Those are solid victories.
The statement by Mike Tork, U.S. Navy Vietnam veteran, as to why he would be at the Vietnam Veterans Memorial Plaza on Oct. 7, 2012, was powerfully and explicitly on point:

“We do not accept the arbitrary 10 pm closing time of the Vietnam Veterans Memorial in New York City as legal, and we will challenge it. The reason this is so important is because we are seeing this tamping down of our rights more and more. Heavier penalties, longer periods in jail, stiffer bails, threats of brutality from a militarized police force, intimidation, the list goes on. There is a real reason for that. The few in control absolutely do not want us coming together to organize. They fear that more than anything because they know if we do, the party is over. If everyone took to the streets it would be done. There would be nothing the 1%could do. That is why they are trying to stop it from happening, either through intimidation or illegal actions.
“Being able to peaceably assemble to petition the government for a redress of grievances is crucial. We have to stand up for our right to do that. We may as well draw that line in the sand now, because it will eventually come to that. If we can’t assemble, then we can’t organize. If we can’t organize, we can’t win. We have to help provide the courage so that others will stand up as well.”
National Lawyers Guild lawyers who worked on our defense are inspired and interested in filing a federal civil suit. Here’s what Jonathan Wallace, an amazing and wonderful First Amendment lawyer, wrote:

“If you guys give the green light, we could bring a federal civil lawsuit challenging park closure on First Amendment grounds. That would give us the opportunity to force the city to make a full record trying to justify a ten pm closure. I really do believe we have very substantial grounds for arguing there is no significant government interest in closing the park.”

If you believe in the critical importance to all of our issues in protecting the right to assemble than we are asking you to support this effort by making a generous contribution at the StopThese Wars Donate Page. As it says on the page, we cannot do this without your help.
The lawyers who will carry this forward will work pro bono, but we will need to raise money for the federal filing fee (about $400), and then $1000 for the transcript of this 5-day trial we just had, plus the inevitable miscellaneous expenses.

This is an issue in particular that veterans have a strong voice and they need your support.
For those who are interested in pushing this case and issue in person, this coming Oct. 7, marking now 12 years of war in Afghanistan, we intend to be back at the Vietnam Veterans Memorial Plaza in NYC, this next time in mass, to stand once again for our rights as veterans to our memories at any hour and for the right of anyone to assemble peacefully and address issues of critical importance in a public place, especially this one. Keep posted.

Tarak Kauff
Board of Directors
Veterans For Peace