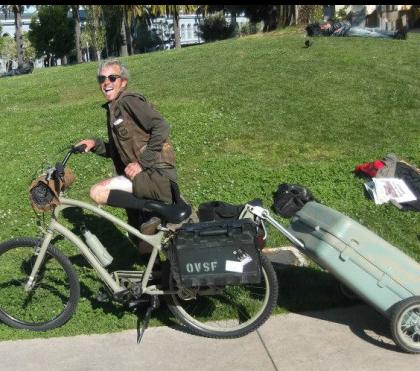 “Pirate” Michael Clift (part of Occupy Veterans San Francisco) is an army veteran who served during the Cold War. Radicalized by his experience with the military, he has been an artist and activist since 1989. He is traveling across the country to bring awareness to the issues of homeless Veterans and other Veteran issues. Challenging homeless veterans to stand up for their rights as human beings by taking their bodies and voices to Washington D.C.

He is with all humility and upmost urgency asking you to consider what he is doing, and to ask you to make a commitment to support his efforts as he continues on this quest for not only the various organizations such as Veterans for Peace and Occupy, but for all those who are unable to join him in this journey, and for all the uncounted and marginalized people they represent.

He will be creating video posts whenever possible of DOING what he can with the money, like passing out food to the needy, providing first aid, and the like. Donors will have video/photographic proof of the expenditures of their donation, and credit on my web sites, with personal thanks via private e-mail, and “batch” acknowledgements posted on Facebook.

HOW IT WORKS:
The donations go into the Paypal account, and then are transfered into a bank account, where it can used as needed. All one needs to do is make the donation to Paypal (you don’t need a PayPal account to donate) by clicking the PayPal donation button at the site. http://occupyveteranssanfrancisco.weebly.com/support.html

You can attach a note telling him what you would like the donation to be used for.

He has recently been joined on his quest to “March Across America” by Debbie, who had been following his blog and videos on line, she initially came down from Colorado in her van to help One Lib and Michael on their journey.  She found Michael on the road, and have now joined forces. They will begin re-transmitting video and live streams, as she has the tools and skill sets previously handled by One Liberty; as well as a vehicle.

ABOUT OCCUPY VETERANS SAN FRANCISCO
Their mission is to encourage Veterans of the United States military to stop taking their own lives with addictions and despair, and to instead take their lives back into their own hands, without depending on either government styled bureaucracy or on the Federal Government itself, which has exploited the soldier and continues to exploit the veteran soldier through many of the various so-called charitable or non-profit organizations.

With our Search and Rescue missions, we connect veterans first with themselves, and then with each other, using a buddy system model that fosters esprit de corps and unit cohesion.