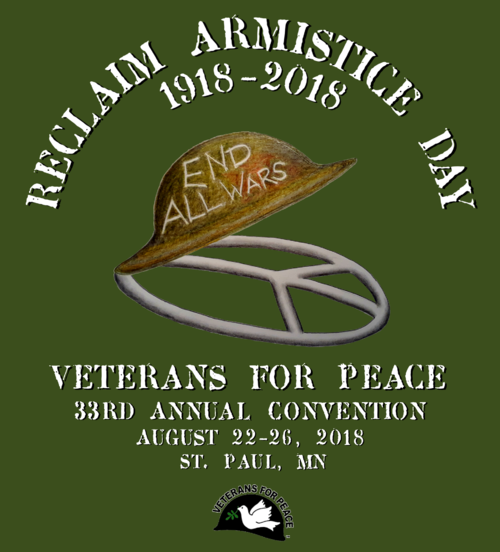 Veterans For Peace is excited to be coming to St. Paul for their 33rd Annual Convention, August 22-26th.
http://www.veteransforpeace.org/2018-annual-convention

The VFP convention will be held 100 years after the armistice that ended the horrific carnage of World War I, and 90 years after the Kellogg-Briand Pact, the international agreement in which countries promised not to use war to resolve “disputes or conflicts of whatever nature or of whatever origin they may be, which may arise among them.  Frank Kellogg, who was a Minnesota senator before becoming U.S. Secretary of State, co-authored the pact with French Foreign Minister
Briand in 1928, for which the two men were awarded the 1929 Nobel Peace Prize.  It is fitting then that the VFP Convention will be held on Kellogg Avenue, the location of the St. Paul InterContinental, a union hotel owned by the Mille Lacs Band of Ojibwe.

We are honored to have Christine Ahn, founder and International Coordinator of Women Cross DMZ, as our banquet speaker on Saturday evening.  Christine Ahn, has  traveled many times to Korea, bringing women from all over the world to meet with women in both the North and the South of Korea. Women Cross DMZ has had a real impact on building support in Korea and the U.S. for peace and disarmament on the Korean Peninsula.

Many women will play leading roles at the VFP convention. Aida Touma-Sliman, a well-known Palestinian journalist and member of the Israeli Knesset will speak on Friday morning about the new apartheid law in Israel.  Medea Benjamin will address the danger of a U.S. war on Iran. Colonel Ann Wright will report on her experience with the Freedom Flotilla, currently headed to Gaza.  Former National Lawyers Guild president Marjorie Cohn will be joined by Phyllis
Bennis and Ellen Barfield on a plenary discussion about the potential for working within the United Nations.  Becky Leuning will facilitate a mini-plenary on the Crisis at the Border, and U.S. Policy in Latin America, to include Nellie Jo David, Tohono O’odham, environmental justice activist, and Daira Quinone, Afro-Colombian singer and human rights activist.

Throughout the weekend we will hear speakers on a range of issues from VFP campaigns and projects, like the Korea Peace Campaign, Save Our VA and updates from the Veterans Peace Team.  We are also honored to have activist leaders from coalition partners from various
organizations like About Face: Veterans Against War and CodePink.

There will also be time to enjoy one another and listen to some good music!  On Thursday evening, we will enjoy a two-hour Mississippi riverboat cruise on the Anson Northrup replete with tempting finger food and music by Ali Washington.  Ali is “a refreshing twist on the soulful sounds of classic Motown and today’s Pop and R&B” and is a local legend!  On Saturday night after the banquet, we will be dancing up a storm to music by a great local DJ.

At our closing plenary on Sunday, we will say our “peace” with a commemoration of the signing of the Kellogg-Briand Pact for world peace 90 years ago. Author, blogger and activist David Swanson and local peace activists from VFP and from Women Against Military Madness (WAMM) will participate in the commemoration.

We can’t wait to see you in St. Paul!  As we said, you really won’t want to miss
it.   Please register now, if you haven’t already done so.