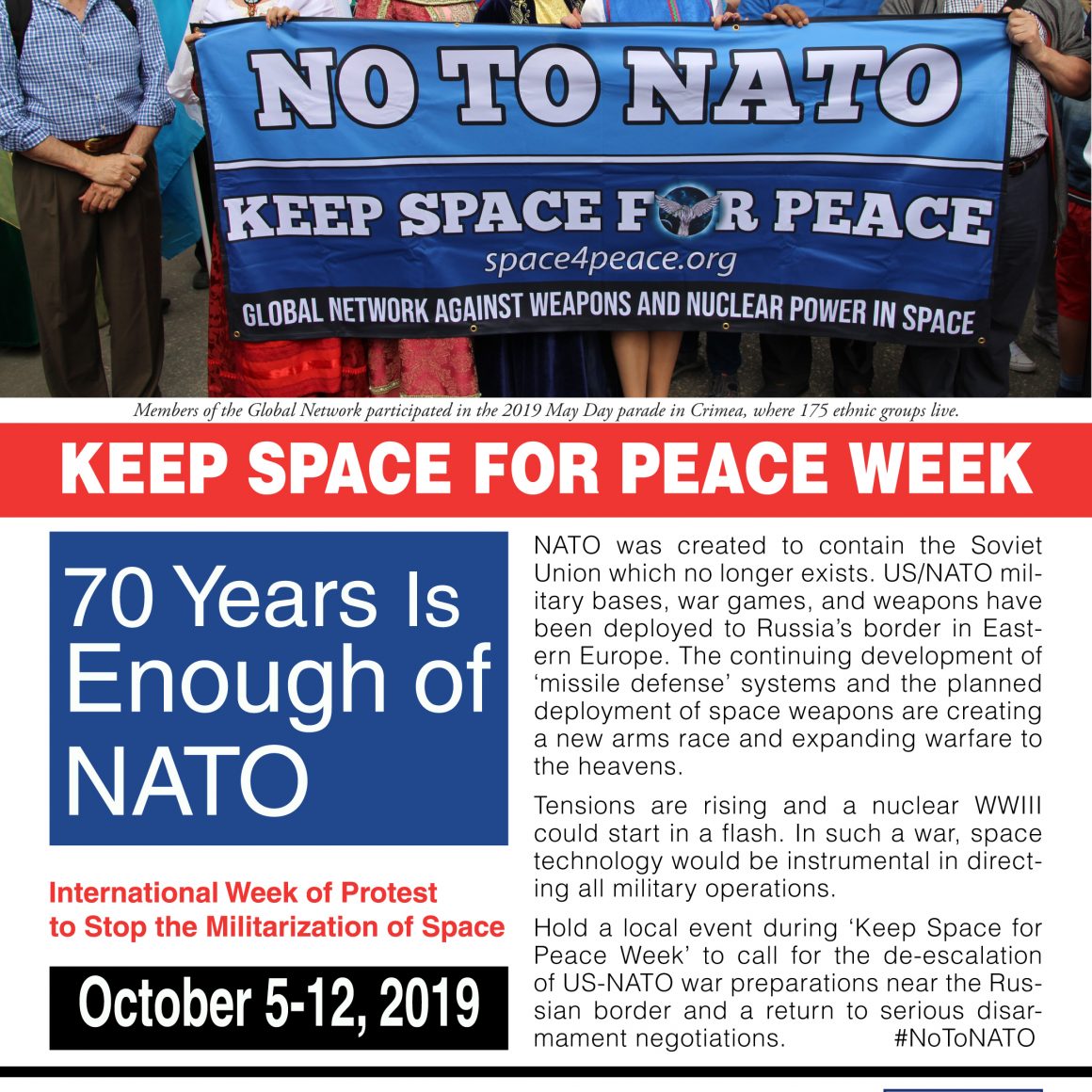 ·       Andover, Massachusetts (Oct 10) Merrimack Valley People for Peace will dedicate its weekly Thursday morning vigil at Raytheon Corporation (where they build ‘missile defense’ radars) to Keep Space for Peace. 350 Lowell St. (Rte 133) 7AM to 8AM.   btquirk@verizon.net

·       Asheville, North Carolina (Oct 5-12) Each day during the week, members of the local chapter of Veterans for Peace will vigil and conduct a walkabout downtown for an hour carrying the No to NATO banner and passing out flyers. Contact Ken Jones at jonesk@maine.edu

·       Augusta, Maine (Oct 11)  Women in Black has entered the 17th year of continually holding weekly peace vigils in Augusta in front of Lithgow Public Library on Friday from 12:30 to 1:00 PM. rleisnerrfm@yahoo.com

·       Creech Air Force Base, Indian Springs, Nevada (Sept 29-Oct 5) 10 YEARS of DRONE RESISTANCE at Creech.  Drone resistance mass mobilization. The U.S. Racist Drone Wars continue to expand around the globe, terrorizing and murdering the most vulnerable and poorest of communities, violating the national sovereignty of people and threatening us all into a much higher chance for an all-out nuclear confrontation.  These are covert wars. Much is censored and hidden from the public, but it doesn’t mean it isn’t happening! Contact: Toby Blomé:  atherbenyckeling@comcast.net  or Eleanor Levine:  eastbaycodepink@gmail.com

·       USAF Croughton, England (Oct 5) USAF Croughton is about to undergo one of the biggest redevelopments since it was constructed by the USAF almost 70 years ago. The new ‘Joint Intelligence Analysis Complex’ will put the site at the heart of a web of military and intelligence networks stretching from the USA to Europe, North Africa and the Middle East. March & rally at main gate from 12-4 pm. Oxfordshire Peace Campaign, oxonpeace@yahoo.co.uk

·       Fort Meade, Maryland (Oct 5) Members of the Baltimore Nonviolence Center will participate in Keep Space for Peace Week by going to the National Security Agency (NSA), from 11 AM to noon. We will carpool, and if interested in joining us contact Max at 410-323-1607 or mobuszewski2001 at Comcast dot net.

·       Gangjeong, Jeju, Korea (Oct 5-12) Promotion of Keep Space for Peace Week in Gangjeong and beyond. Korea is one of NATO partnership nations. The UN Command (UNC) which manages Korean War Armistice was created during the Korean War. It is actually a US military-led organ and supposed to have been dissolved decades ago by the decision of UN. The UNC steals the name and flag of UN. It is composed of 18 nations including 11 NATO membership nations and at least 4 NATO partnership nations. It has its rear troop units in Japan. People concern that it might function as the Asian version NATO. Recently personnel from the UN Command visited the Jeju navy base in Gangjeong village. We will share the importance of exposing UNC and other space related matters during the Keep Space for Peace week. Contact  armha2013@gmail.com

·       Kathmandu, Nepal (Oct 5-12) We from GN Chapter Nepal, will organize GN October 5-12 programs at various places among the students teachers, scholars, thinkers and philosophers of the Nepalese society. Apart from this week protest for the peaceful Space; we will also inform in front of them (the audience) that our GN Coordinator from US will also come and give a talk on the pertinent issue on October 16-17, 2019. yprabhuray@gmail.com

·       Largo, Florida (Oct 9) Peace First will be at the Raytheon plant at 7887 Bryan Dairy Rd, as part of Keep Space for Peace Week. Raytheon is the fourth largest weapons manufacturer in the world. Raytheon has made huge profits from the war in Yemen. 4:30 – 5:30 pm  sjstew@gte.net

·       Leicester, England (Oct 6) Weaving Hope for the Future.  With major threats to our planet we will be finding hope through dance, poetry and storytelling.  Castle Gardens Maypole from 2-4 pm.  Leicester CND.  pennywalker@riseup.net

·       Limerick, Ireland (Oct 5-6) World BEYOND War’s fourth annual global conference on the abolition of war will be held on October 5th and 6th and include a rally on the 6th at Shannon Airport, where U.S. military forces routinely pass through in violation of Irish neutrality and of laws against war.  http://worldbeyondwar.org

·        Milwaukee, Wisconsin (Oct 11) Showing the award-winning documentary ‘Pax Americana and the Weaponization of Space’ at 7 PM at the Peace Center on 1001 E Keefe Ave. Sponsored by Peace Action WI, co-sponsored by Women’ International League for Peace and Freedom, Veterans for Peace, Milwaukee and more.  pamrichard35@gmail.com

·       Tampa, Florida (Oct 8) Demonstration outside Senators Scott’s and Rubio’s offices in the U.S. Court House, 801 N. Florida Ave. 10:30-11:30 AM.  We will make Sen. Scott’s connections to Raytheon the theme of the demonstration. President Trump wants to allow Raytheon to manufacture weapons inside Saudi Arabia. Call (727) 894-2832 for more info.

·       Toronto, Canada (Oct 9) Vigil, outside the NATO Association of Canada office, 48 Yonge Street, from 12-1pm. Organized by the Canadian Voice of Women for Peace. tlorincz@dal.ca

·       Tucson, Arizona (Oct 10) Peace vigil at Davis-Monthan AFB at 7:00 – 8:00 a.m.  Air National Guard troops at Davis-Monthan are remotely piloting UAV’s (Unmanned Aerial Vehicles) that are firing guided bombs and missiles and killing more civilians than targeted “terrorists” in Afghanistan, Iraq, Syria, Pakistan and possibly more sovereign nations.  A-10 warplanes that train out of Davis-Monthan are responsible for the vast majority of radioactive ammunition – estimated at well over 400 tons – used in Iraq since 1991. Signs provided, or bring your own!  More info: nukeresister@igc.org

·       Ukiah, California (Oct 8)  A “Keep Space for Peace Week” event will be held at the Mendocino Environmental Center 6-9 PM. “Space Night at the MEC” will start with an open house and information exchange at 6:00 pm, followed by Open Mike on KMEC radio from 7-9 pm. The Mendocino Environmental Center ia at 106 W. Standley Street. KMEC radio broadcasts at 105.1FM and streams live on the internet at www.kmecradio.org . The local event is sponsored by The Space Treaty Project. For more information go to www.spacetreaty.org  or Facebook: The Space League.

·       Visakhapatnam, India (Oct 12-13) International Conference on Super Powers’ Dominion in Outer Space & Global Sustainable Development. Co-Sponsored by Damodaram Sanjivayya National Law University and the Global Network. Speakers will include Professor Peter Kuznick, Subrata Ghoshroy from MIT, Lindis Percy from UK, Professor Aruna Kammila and Bruce Gagnon. People of our planet must consider the question of the kind of seed one carries from earth into the heavens.  The essential objective of this Conference is to give a stage to exhibit emerging issues and challenges in outer space, including legal, political, economic as well as scientific in order to   ensure peace and security in the international sphere with concern to outer space. For details intconf@dsnlu.ac.in

·       White House, Washington DC (Oct 11-12) Rage Against the War Machine. Starting at the White House and march to the Pentagon. The nuclear clock is at two minutes to midnight – we must unite for peace and against the war machine.  A Conference, the Anti-Imperialist Revolution Summit, will be held the next day on Oct 12. For more info http://marchonpentagon.com/2019-march

·       Washington DC (Oct 7) The Pentagon Monday at 7-8 AM. Will Hold Keep Space for Peace and No Weapons in Space signs at weekly Dorothy Day Catholic Worker Peace Vigil.  artlaffin@hotmail.com


Space Week Co-Sponsors:
• March on the Pentagon: Rage Against the War Machine
• No to War – No to NATO
• United National Antiwar Committee (UNAC)
• US Peace Council
• Veterans For Peace
• Women’s International League for Peace & Freedom
• WorldBeyondWar.org